Painting for Time of Daughters 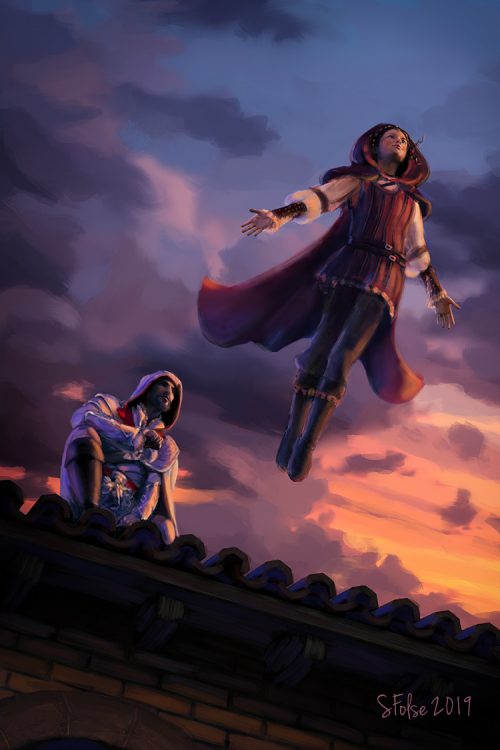 This artwork is fan art of the video game Assassin’s Creed: Brotherhood. I did it for a fanworks exchange, which is a sort of Secret Santa-like event. Artists and writers sign up and offer and request writing or art for several different fandoms they like. They get matched up and secretly produce a work for the person they’re matched to. You can also do extra works, known as treats. This work is a treat I did for someone I knew from another exchange. I’d been intending to paint something for them in that other exchange, but the right prompt never showed up. When I saw their signup for this exchange, asking for Ezio Auditore and his sister Claudia, I knew that I wanted to paint Claudia performing a Leap of Faith after she’d been inducted into the Assassins, Ezio watching with brotherly admiration and pride. 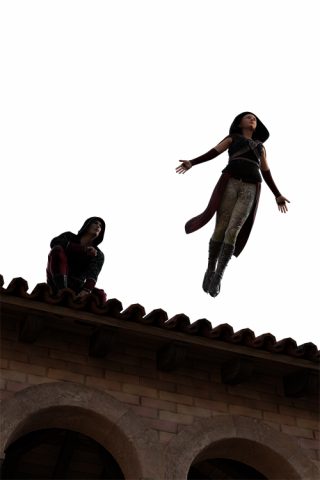 After I got the rough idea of the pose and angle I wanted, I rendered the scene in 3D using some basic models and an Italian building asset that I’d been wanting to buy. This allowed me to get the angle, poses, and lighting just right. I then painted over it using Photoshop.

You can see the original render here. It’s pretty basic: two generic models with generic fantasy clothing, and a fairly simple lighting scheme that’s mostly unidirectional. I didn’t have any rendered environments that fit the mood I wanted, so I ended up finding a photo in my large stacks of commercial reference and paint that to get in the dramatic skies and colorful lighting that I really wanted.