Golden Eyes of the Tiger

This artwork is fan art of the video game Deus Ex. I did it for a fanworks exchange, which is a sort of Secret Santa-like event. Artists and writers sign up and offer and request writing or art for several different fandoms they like. They get matched up and secretly produce a work for the person they’re matched to. I matched to a person who requested Adam Jenson, the main character of Deus Ex, and I illustrated a short fanfic they’d written. The fic is about what it’s like for a person with augmented senses to live in an apartment building with rather amorous neighbors. (Answer: Awkward. It’s very awkward.) 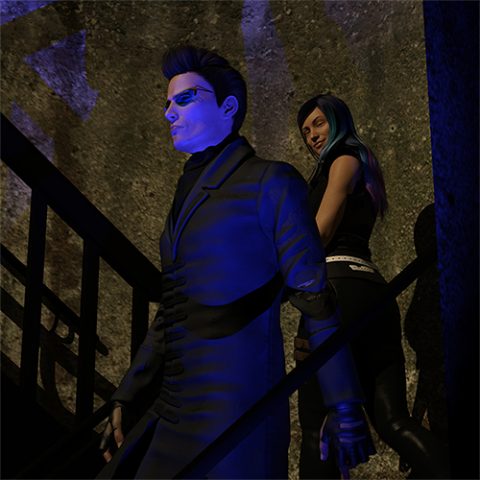 First, I figured out what I wanted the picture to look like using quick sketches. Then I rendered the scene in a 3D program to get the perspective, angle, and lighting just right. After that, I painted over the render in Photoshop to produce the final artwork.

I wanted the focus to be first on Adam’s face and embarrassment, and second on the neighbor’s face as she checks him out. So I experimented with a combo of warm and cool colored light to bring Adam’s face forward. After that, I did the neighbor in warm tones to pop her out from the background.

The title “I’d climb that like a funicular” refers to a scene in Deus Ex where Adam engages in a fight while waiting for a funicular to show up.