How to spot if a cover is self-published

“So why do you crop the heads off your models?” 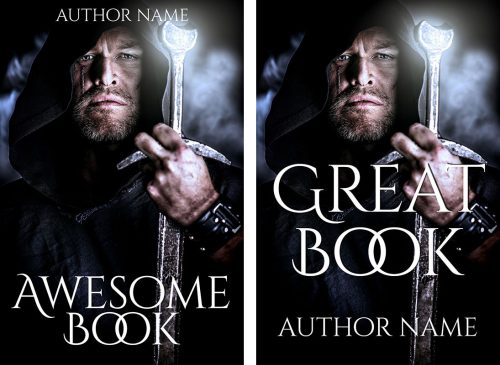 There is one major giveaway that says “Hello! I’m self-published!” on a cover. And I’ve been wondering for quite some time why it’s so common–and why I’ve occasionally been guilty of it myself! I think I’ve found the answer!

What is the giveaway, and why are covers designed this way?

In many cases–not all!–text way down at the bottom with large empty spaces in the middle makes the cover feel unbalanced. It also draws attention to the art, to the detriment of the title. You want your title to be remembered! You’ll also note that the trad publishing mockup uses smaller words for the title, in order to make it large enough to be seen and remembered.

And then, the indie authors also have a tendency to go “But it looks so bland! I need to jazz up the title a little!” And you end up with this:

It’s mystified me why amateur cover designers shove the title so far down the book, leaving so much of the image empty. For a while I thought maybe it was that they were worried about not letting the art show. Certainly, if you drop the big bucks for a cover painting, you might be squeamish at covering a lot of it up by text.

Today, I realized differently. I was writing up notes from an art seminar I’d taken, in which they discussed the limitations inherent in designing art for a movie poster. You have to leave the bottom 1/3 free for the movie title and associated credits. You need to leave space at the top for the actors’ names. You need to leave the middle empty so that the actors’ faces can be seen, because they have contracts that specify minute details of how much space they need to occupy, whether they’re to the left or to the right, and so on.

This is the image that these cover designers have in mind!

However, it rarely works on the cover of a book because you don’t have the extra text at the bottom to balance it out.

But if you’re going to shove your title down to the bottom of the artwork, you should do it because it works with the artwork and design, not because you can’t think of any other place to put it.